Abbott with his incredible sense of entitlement and epic ignorance may have bit off more than he can chew when he confronted Putin at APEC. He may think of himself as a big swinging dick but I think Putin is out doing him in that department. Maybe he should keep to racing planes with our own swinging dick John Key when they’re not making bad jokes about painful issues such as rape, paedophilia and murder.

7News has been told four Russian warships are bearing down on Australian waters, led by the guided missile Cruiser, Varyag, the flag ship of Russia’s Pacific fleet.

Also heading south is the destroyer, Marshal Shaposhnikov – it’s not short of firepower either. 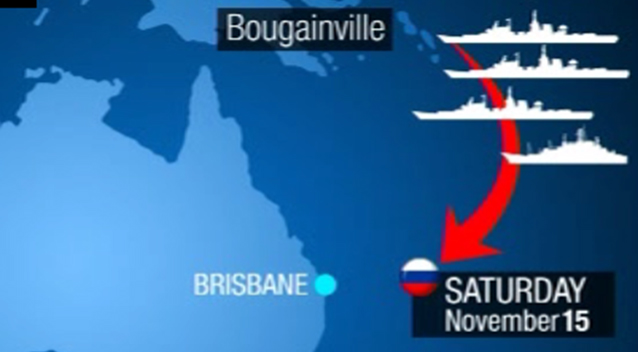 They are being supported by the salvage tug Fotiy Krylov and supply tanker Boris Butoma.

The task group is in the Coral Sea South of Bougainville and appear on course for waters off Australia’s east coast.

All four could be sitting off Brisbane by Saturday.