Several suicide bombers blew themselves up outside the Stade de France sports stadium where the French football team was playing Germany, and another died in a street in eastern Paris.

One of the gunmen who died after attacking a Paris concert hall on Friday (Saturday NZ Time) had French nationality and was known to have ties with Islamist militants, a source close to the inquiry into a series of deadly attacks in Paris said on Saturday (Sunday NZT).

The same source said that the gunman’s body had been identified by his fingerprints and that he was from the Courcouronnes suburb south of Paris.

Earlier, sources close to the investigation said that a Syrian passport had been found near the body of one of the suicide bombers who blew himself up near a Paris soccer stadium in one of the other attacks.

French media also said that an Egyptian passport had been found near the body of a second suicide bomber at the site. Stuff.co.nz

At 9.36pm, five minutes after a second suicide bomber blew himself up outside the Stade de France, President Francois Hollande (left) learned of the Paris terror attacks while watching France play Germany. The three explosions outside the arena were among a series of attacks across Paris which left 127 dead and several more wounded. Too scared to face the chaos outside, thousands of fans invaded the pitch after the match. ISIS today claimed responsibility for the carnage in the French capital, claiming they were the ‘first in a storm’ of fresh attacks. Hollande branded attacks an ‘act of war’ and vowed to ‘mercilessly’ retaliate against the extremists. Daily Mail

The first cracks in the official story about what took place in Paris are beginning to appear. Apart from the fact that people who blow themselves up don’t usually have intact passports after the fact something very strange happened around in the Stade or stadium where a friendly Soccer game between Germany and France too place. 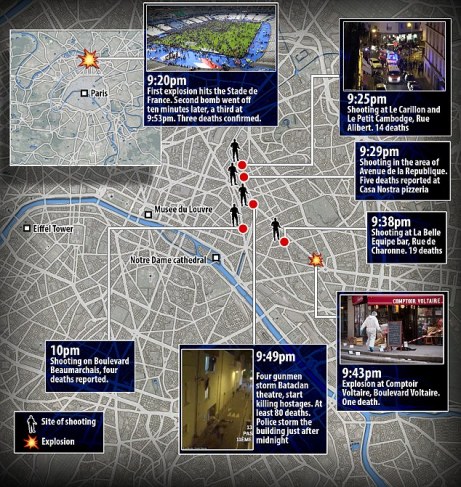 Now here is the strange thing. It turns out the French President Hollande was attending the football game. Below is the exact time the the president is being told that Paris is under attacks. Look how calm he looks? Yet 17 minutes before this phone call a bomb exploded outside the stadium! Not only that but three other attacks had taken place all over the centre of France already. And look how calm everybody is. The game is still going, the people are still in their seats. 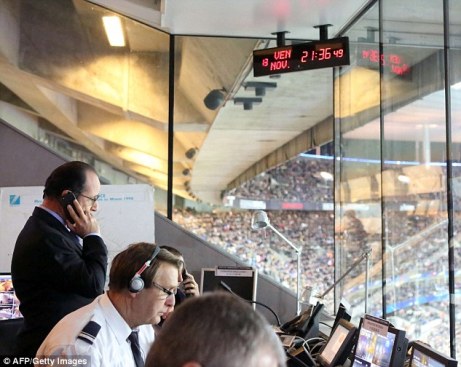 And here is a photo made so it’s claimed at 9:36 pm. he is still sitting in his chair outside after the second bomb blast. Now correct me if I’m wrong but that is the worst case of security breach since Bush’s famous “goat” moment where his security detail left him sitting in a class room while the US was under attack on 9/11!