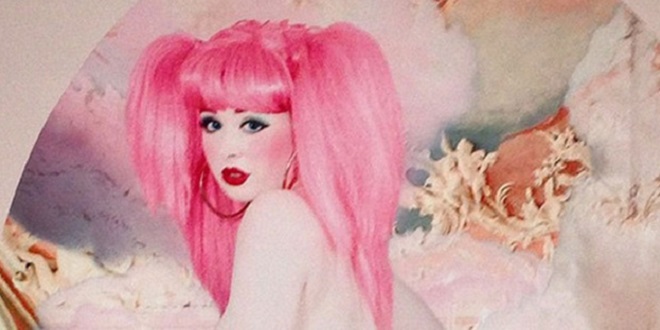 During the final days of a decadent and unaccountable Roman empire the daughters of emperors and other ruling families had the morals of ally cats. They could and had to because their families were dysfunctional and ruled without having to account for their behaviour and it was a decadent free for all. They also were incredibly damaged and warped because of the behaviour of their parents whose sexual behaviour still stands as a standard for depravity today!

This is the invite of Cherry Lazar, also known as Stephie Key, to her first solo exhibition in Paris. She is John Key’s daughter.

In light of her fathers utter disregard for the feelings of waitresses and little girls with pony tails, I fear that this photo will be seen through entirely different eyes then before ponytailgate by many.

I, for example, see a girl who objectifies and  sexualises herself in a rather damaged and dysfunctional way. There is nothing strong about this, absolutely nothing!

She may say they aren’t meant to be a cry for attention but then denial isn’t just a river in Egypt. This girl doesn’t need an exhibition. She needs serious therapy!

As Stephie Key prepares for her first solo art exhibition in Paris, the Prime Minister’s daughter has revealed the inspiration behind her risque creations.

Key, 22, has raised eyebrows by exposing her body to explore recurring themes of marriage and sexuality in her art, which she creates under the pseudonym Cherry Lazar.

The work has featured Key topless and pointing a gun at her head, dressed as a sexy nurse, and a couple of well-known pieces featuring the artist as a human plate – covered in sushi and McDonald’s.

As she prepares for the exhibition – called Cherry on Top at the Jewelry Shop Gallery – she has revealed she has been inspired by “strong, beautiful, sensual and powerful women”, including the second wave feminists of Britain and the US in the 70s, who were “militantly aware of their own sexuality and their rights as females”.

“The definition of beauty is different everywhere, but the sense of self-confidence and power is universal,” Key said in a statement to the Herald on Sunday from gallerist Trevor Mansfield.

“I am an ardent proponent of femininity, and more so, of the pride and ability to live life the way that you see fit,” she said.

Mansfield said Key “plays with stereotypes and ideals to show that these can be embraced and used. Just like the reclaiming of negative words, her art reclaims traditional gender stereotypes (the sexy nurse, the naughty bride) to show that women are not weaker because of these, but stronger because they can embrace and use them to their advantage”.

Mansfield, a fashion and fine art photographer based in Paris and San Francisco, says since Key moved to the prestigious Paris College of Art, she has learned to embrace her innermost thoughts.

“Stephie has clarified that the nature of her art is no cry for attention in relation to her parents – it is simply her expressing herself and her fantasies,” he said. “The imagination and execution behind the work comes from a girlishly innocent origin. In the production of the artworks, the environment feels like a young girl’s slumber party, a girl’s night wearing wigs and costumes,” Mansfield said.