Flying over warzone Ukraine, The probable and Convenient Happens

At no juncture during the Ukrainian crisis could the downing of Malaysian Boeing 777 flight MH17 have been more convenient for NATO and its proxy regime in Kiev.

Kiev’s forces were being picked apart in eastern Ukraine with several units encircled and destroyed. In the west of the country, dissent was growing by Ukrainians unwilling to march off to fight in the east. NATO’s attempts to bait Russia into moving into Ukrainian territory and shift global opinion against Moscow had repeatedly failed. 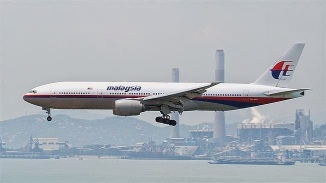 Image: Yet another Malaysia Boeing 777 is lost under extraordinary circumstances this year.

The final card to be played by the US was another round of sanctions that almost immediately was ridiculed as ineffective and impotent. Even US corporate-financier interests condemned the latest round of sanctions claiming they were “unilateral” in nature and thus limited US enterprise from interacting with Russia while leaving European competitors free to move into the void.  An effective US policy of confronting, containing, and undermining Russia would require multilateral sanctions with almost universal support – but the impetus for such sweeping sanctions did not exist – until now.

The US FAA Declared Ukrainian Airspace Off-Limits 3 Months Ago

Indeed, the stars have aligned for NATO. While the US Federal Aviation Administration (FAA) declared Ukrainian airspace off limits to all aircraft under its jurisdiction, it appears other airlines continued flying over what has been a warzone for months. The Atlantic in a report titled, “The FAA’s Notice Prohibiting Airline Flights Over Ukraine,” stated clearly that:

Did aviation authorities know that this was a dangerous area?

Yes, they most certainly did. Nearly three months ago, on the “Special Rules” section of its site, the U.S. Federal Aviation Administration put out an order prohibiting American pilots, airlines, charter carriers, and everyone else over whom the FAA has direct jurisdiction, from flying over parts of Ukraine.

For months fighters in eastern Ukraine have been downing Ukrainian military helicopters, warplanes, and even a military transport aircraft – all using various formsof man-portable anti-air missiles – all of which are incapable of downing the Malaysian 777 which was flying at approximately 33,000 feet – well above the effective range of man-portable air defense systems.

The system cited as responsible for the downing of flight MH17, was the sophisticated Buk radar guided, tracked-vehicle mounted, anti-aircraft missile system. The New York Daily News reported in an article titled, “Malaysia Airlines plane feared shot down in Ukraine near Russian border,” that:

Anton Gerashenko, an adviser to Ukraine’s Interior Minister, said on Facebook that the plane was flying at an altitude of 33,000 feet when it was hit by a missile fired from a Buk launcher, reported Interfax, a Ukranian news agency.