It was announced to day on the NZ News that there is to be a new SAS training facility South of Auckland. The SAS which has no scheduled deployments except revenge attacks on villagers who may or may not have been involved in rebel activities against foreigners in their country seems to need a brand spanking new training facility South of Auckland favourably positioned right next to some of the poorest Maori youth dense areas to pick up cannon fodder from. 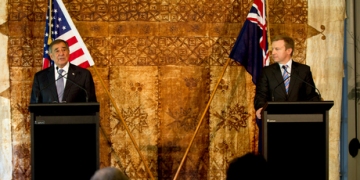 According to the Minister of Defence the SAS needs this because “you never know” what’s next (perhaps those next war efforts John Key was not talking about)!

The facility is going to be build by a FOREIGN designer and I don’t know about you but Haliburton comes to mind. they are after all the biggest war profiteer and specialised in building these training camps. They are also the biggest employer of mercenaries and will no doubt supply New Zealand with the latest and greatest in training to get our boys to the top of their performance as killers for the empire. We are not allowed to know how much all this is going to cost because it might drive prices for quotes up but I’m thinking we are not allowed to know how big the first US bases South of Auckland will be and how many US Marines will come over to help train our boys to work on buses, trains and oil platforms. Oh oops did I just mention civilian targets. No worries, I’m sure they are in Syria, Iran and other faraway places with little brown people with funny hats.

The Defence Force wants the multimillion-dollar base at Ardmore in South Auckland to be operating by 2015.

It is looking internationally for a designer and has disclosed details about what it wants for the training facility for the SAS.

The design brief says the building must cater for simulated explosions and 360-degree live weapon firing on multiple levels.

The indoor-outdoor facility would also be able to simulate exercises on ships, aircraft, buses, trains or oil rigs with vehicle, foot and air assaults.

Designers must also consider how external shooters could fire into the building for training purposes.

Jonathan Coleman maintains the base is needed, despite the SAS not having any future deployments.

“The project is absolutely necessary, because when the SAS is called upon – and we never know when or why that would be – these guys have got to be absolutely at the peak of their training. So they do need a facility like this to make sure they’re properly prepared.”

Dr Coleman will not say how much the facility will cost, citing commercial sensitivity.

4 thoughts on “A New SAS training Facility: Can You say Haliburton, Mercenaries and the First US Bases in 2015 South Of Auckland?”